Any man with even a passing interest in the goings on in Tinseltown will have noticed a trend that’s been growing — both literally and figuratively — over the past year or two. Hollywood locks have been getting longer, with short cropped cuts giving way to wavy, textured mops. And the change is one that’s not gone unnoticed by the barbering world. “It’s a trend that’s been gathering momentum for the last couple of seasons, and it is linked to what’s been happening in men’s fashion,” says Joe Mills, founder of London’s Joe and Co. “No one wants to look the same, and this is driving the shift to longer hair and softer styles.” It’s fair to say that the lean towards longer hair coincided with the rise of maximalism on the runways (think chunky trainers and logo tees), but it’s not just about keeping up with fashion. “With longer hair, men also like that you can style it differently and completely alter your look from one day to the next,” adds Mills. “We’ve had quite a few years of the short back and sides, so it’s time for a change. And the fact that long hair is popping up everywhere shows that this is where things are heading.”

However, for all their benefits, trailing tresses are noticeably trickier to maintain than a classic military haircut. “It’s all about the condition of your hair,” says Mills. “Growing it out, you have to take care of it.” That means choosing the right hair products, from conditioners to sun protection, and paying careful attention to styling too. “Gels, styling creams and pastes are going to be your friend,” adds Mills. “You don’t need to have it trimmed every six weeks, but you need to get it cut into a shape that will grow out well.” Given that it’s a trend bred on the red carpet, who better to get inspiration from than 11 famous men who’ve shown the rest of us how to do long hair the right way. These are them.

If you can take your eyes off whatever technicolour get-up he’s wearing long enough to look up, you’ll notice that Jared Leto has got one seriously head of long hair on the go. The singer, actor, potential second coming of Christ and certified sartorial fruit loop has the sort of shimmering mane that has women stopping him on Hollywood Boulevard to ask what leave-in conditioner he uses. And that’s precisely why it works. Leto’s locks are glossy and well cared for. Try hair this length without running a comb through for a few days and you’re Mel Gibson in Braveheart. A look no one should be shooting for. At just 22 years of age, and with acting credits in the likes of Homeland, Interstellar and a breakthrough part in Call Me By Your Name, it’s easy to feel a little envious of Timothée Chalamet. And that’s before we even get onto his looks. Chalamet is blessed in the genetics department, sure, but it’s his flowing chestnut brown hair that really seals the deal. The longer length compliments his square-shaped face, with the soft waves and curls counterbalancing his angular features. This is one man who knows how to match his hairstyle to his face shape. He may have got his big break playing a man with a severe hangover, but Bradley Cooper’s wavy mid-length locks look anything but rough around the edges. Brushed back to casual perfection, Cooper’s hair is a shining example of how to do a longer style without going full Captain Caveman. Just a touch of pomade, a quick run through with the fingers and a smattering of stubble is all it takes to look like Hollywood royalty. Well, that and the bone structure of a Greek god. But the rest of us will just have to make do. Dev Patel has come a long way since his early days as a teenage tearaway on Skins. And so has his hair. In fact, like his suits, the gradual improvement of Dev’s do has correlated suspiciously closely with his roles becoming bigger and better over the years. Coincidence? We think not. These casting agents know a good mane when they see one and the Lion star has one of the best in the business. The messy, textured style works brilliantly because it looks loose and natural. It’s a great example of the more laid-back styles that can be seen dominating the red carpets of late. Credit where credit’s due: for a man who has had the entire world massaging his ego since the age of 14, Justin Bieber has done well not to (completely) grow into the devil incarnate. The worst he’s done is act like a bratty teenager, get arrested once and sport the odd bad haircut, which in the scheme of things is largely forgivable. To add to the praises, not all of Bieber’s barnets have been terrible. In fact, his recent Cobain-esque dye job actually looks pretty good. Let’s hope he stays on the long, straight and narrow from here on. Kit Harrington doesn’t have it easy. Even the whole fighting an army of White Walkers thing aside, he has the often difficult task of managing curly hair. Fortunately, the Game of Thrones actor is seemingly an expert, leaving the rest of us seriously considering a perm. Harington’s hair, unlike most others in this list, works well because it’s almost completely natural. Instead of trying to straighten his ringlets out, or style them into oblivion, the actor has embraced the frizz and gone au naturale. A smart move that sees him earn pride of place among Hollywood’s hairiest. Teenage boy bands formed on TV talent shows don’t exactly have a glowing track record when it comes to their groundbreaking looks. Harry Styles, however, is the exception. One Direction’s premier heartthrob is a man who’s had more, err, hairy styles than most people have had hot dinners, with one of his most popular being his grown-out rocker locks, which replaced his early teenybopper tresses and marked his transition from reality star to credible musician. 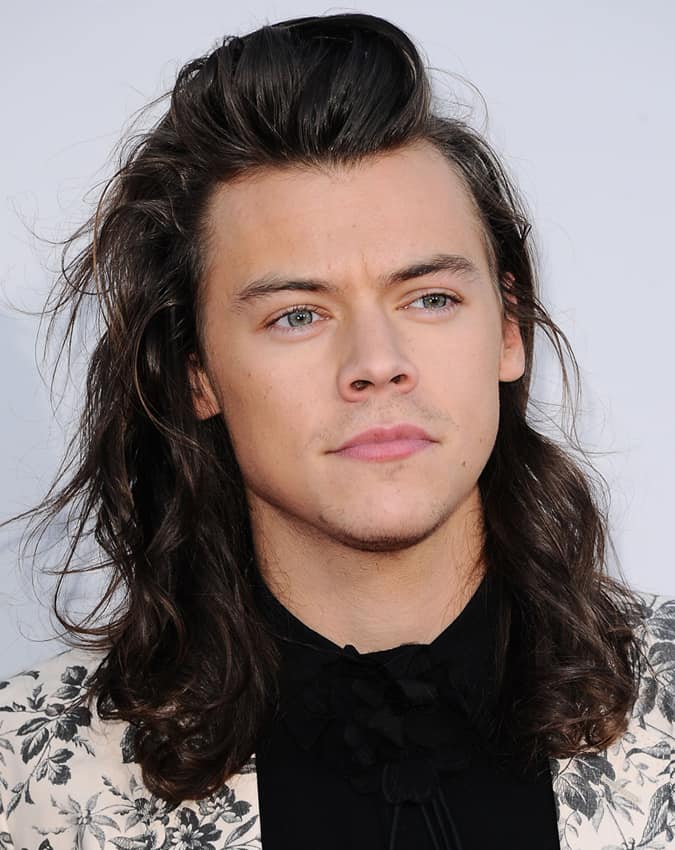 Hawaiian hunk Jason Momoa stole hearts (and probably a load of girlfriends) when he broke through playing Dothraki hardman Khal Drogo in Game of Thrones. While his acting was impressive, Momoa’s real crowning glory was that he became the only man in known history to wear a man bun and make it look not just plausible, but certifiably badass. Mind you, with a face like that, you could rock a bowl cut from your mum and still look smouldering. 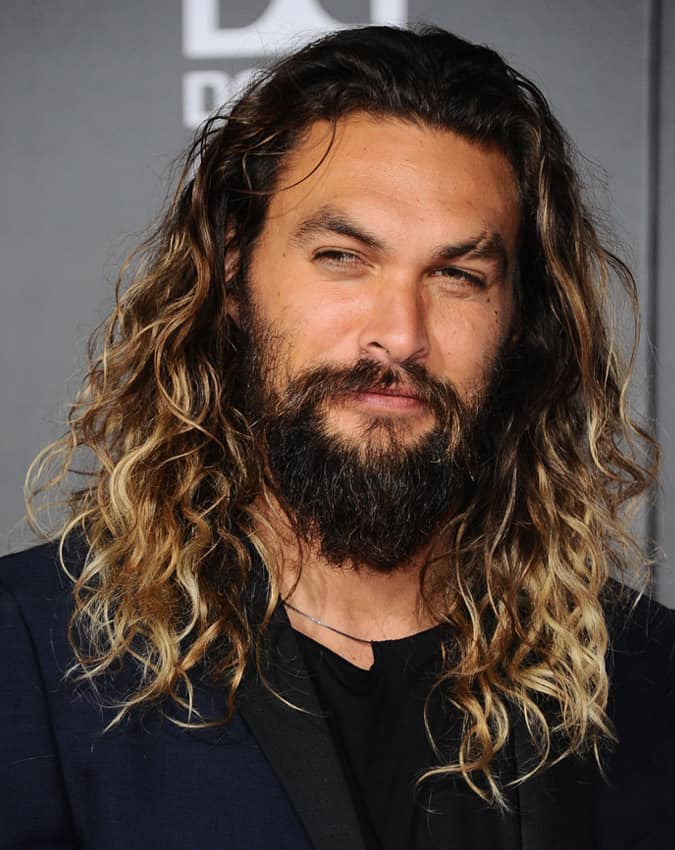 Ayy, Kendrick went through a number of haircuts in the early years. But ayy, since the 2015 release of the critically acclaimed To Pimp a Butterfly, ayy, Cornrow Kenny’s hair has become something of, ayy, a trademark. Well, that and saying “ayy” all the time. It’s a low-maintenance style that’s ideal for unruly afro hair, and works well in Lamar’s case as it compliments his round face shape by adding some visible length to his head. It’s got to be hard to stay humble and sit down with hair like that. There’s no two ways about it: Dave Grohl is cool. Like, really cool. After all, not only is the man one of the most influential rock musicians of the past 20 years, but his Rock and Roll Hall of Fame-worthy hair is some of the finest ever to have graced the Pyramid stage at Glastonbury. The secret? It’s natural and carefree, yet conditioned to perfection. Plus, like his beard, it’s just the right length to avoid stepping into greasy headbanger territory. Teaming a bushy grey beard with shoulder-length silver hair isn’t the kind of tonsorial move we’d usually advocate. However, for proof that it can work look to Jeff Bridges, who as well as being the most experienced celebrity on our list, also has one of the most effortlessly cool hairstyles. The American actor’s flowing, slicked-back mane is proof that you’re never too old to rock long hair. A bit of confidence and a beard that’s kept neat and tidy at all times is all you need to carry it off. 7 Common Men’s Hair Mistakes (And How To Fix Them)