A sun tattoo design can symbolize a wide variety of concepts, from beginning a new life or emerging from a dark place or situation to widely popular ideas and beliefs such as truth, light, warmth, and positivity. With the sun being so central to all life on Earth, it’s long been a tattoo subject associated with divinity in the religions and cultures of all continents. The sun has been worshipped by the ancient Greeks, Romans, and Ancient Egyptians, just to name a few. The sun’s relationship with the moon tattoo design is also a popular feature of various ink cultures, as is the idea of enlightenment, rebirth, and re-commitment, or the growth of something fresh and new from the remnants of a previous experience. Sun tattoo meaning is complex and interesting whether you apply a historical symbolic lens or look at your tattoo idea from a more contemporary perspective. This article will demonstrate some of the main concepts applied to sun-related ink and related imagery, from small sun tattoo art design to larger new wave symbolic meaning. 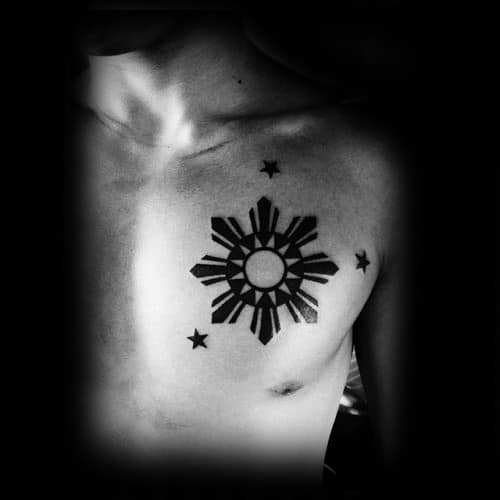 The Filipino Sun is one of the more popular Asian tribal tattoos seen decorating bodies, serving to represent freedom and unity.

The simple black sun is an enticing and powerful piece that’s usually designed with the traditional eight rays or incorporating several small sun rays between the larger eight ray design.

Many have embraced this black sun tattoo as a standalone piece, but it’s often paired with other remarkable Filipino tribal patterns to give the work different meanings. 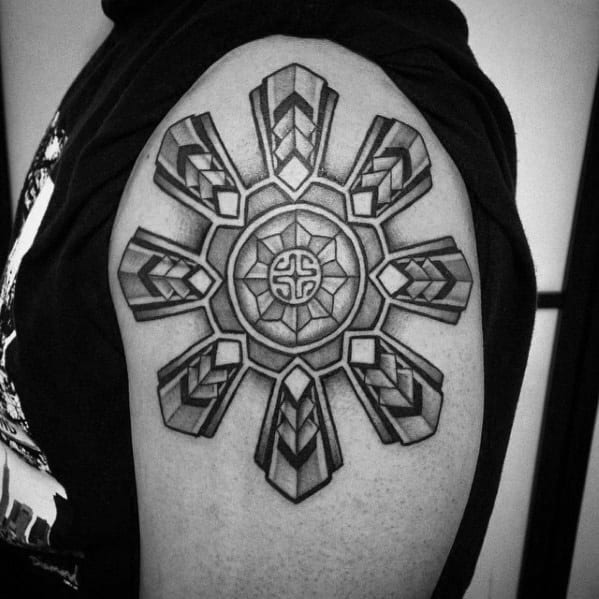 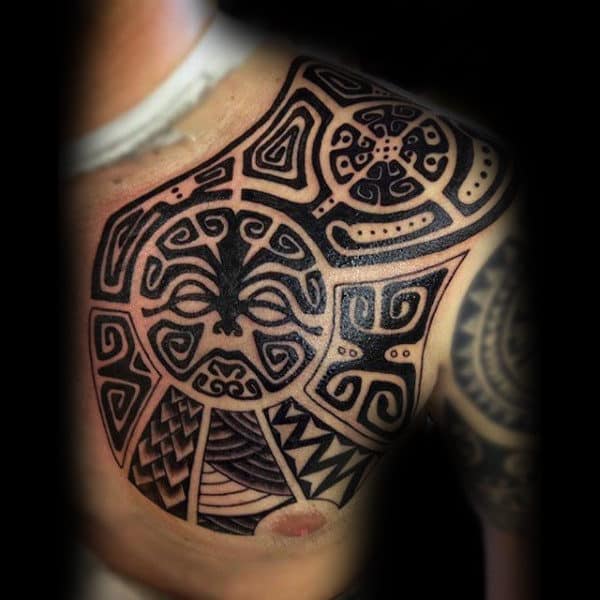 Every ancient culture with tattoo history, from the Celts to Polynesians, Mayans, Inca, and Native American tribal cultures, or even many African tribes, possess their own variation of the tribal sun tattoo.

These distinctive sun symbol designs showcase a polished ideal of the orb’s necessity in everyone’s life and are often represented alongside moon tattoo ideas or other important life-giving references.

While some tribal tattoo designs are elaborate, most ink tribal art relies on simplicity of the message, strong black ink, and patterned or symmetrical linework to make links to the tribal tattoo culture the piece represents. 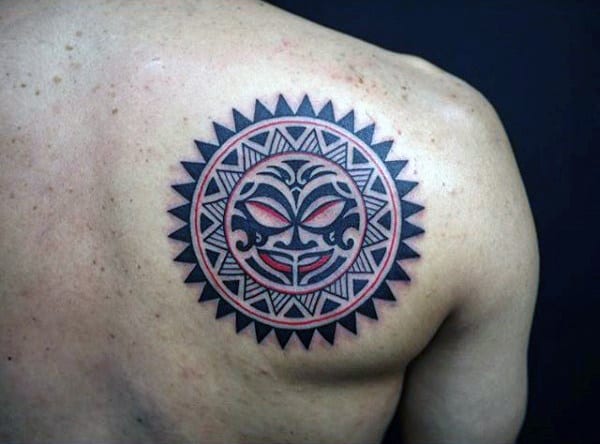 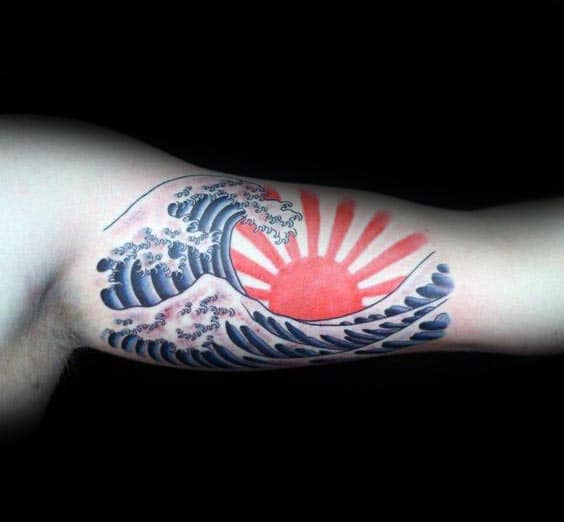 An icon of Japanese culture, the blood-red sun rising has been around since the Edo Period.

The simplest incarnation of rising sun tattoo art is a round blood rising sun flag, but the most distinctive variations showcase corresponding rays of light added to the sun symbolism.

Mt. Fuji is a focal point of many rising sun illustrations and is popular for those with ties to Japanese culture. The artwork sometimes replicates old-school woodblock prints. The peak can be maximized with fluffy clouds and tasteful cranes, or Shinto features add meditative calm to a traditionally masculine symbol. 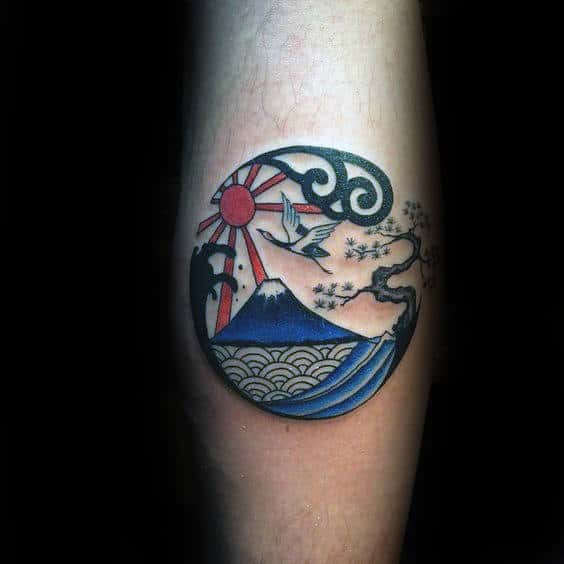 The Sun in the Celtic Cross Tattoo 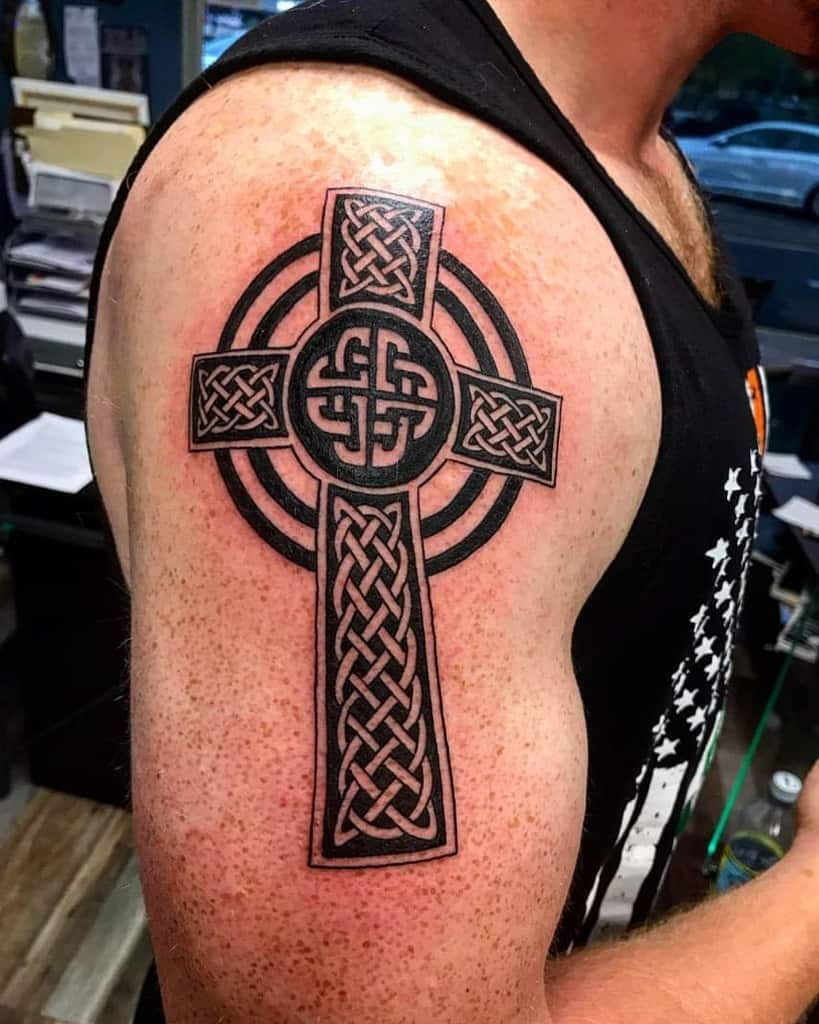 It could be a holdover from pagan religions, arguing that the iconic image is a combination of an even armed cross within a circle – a common symbol in many pagan traditions-and the Christian cross. 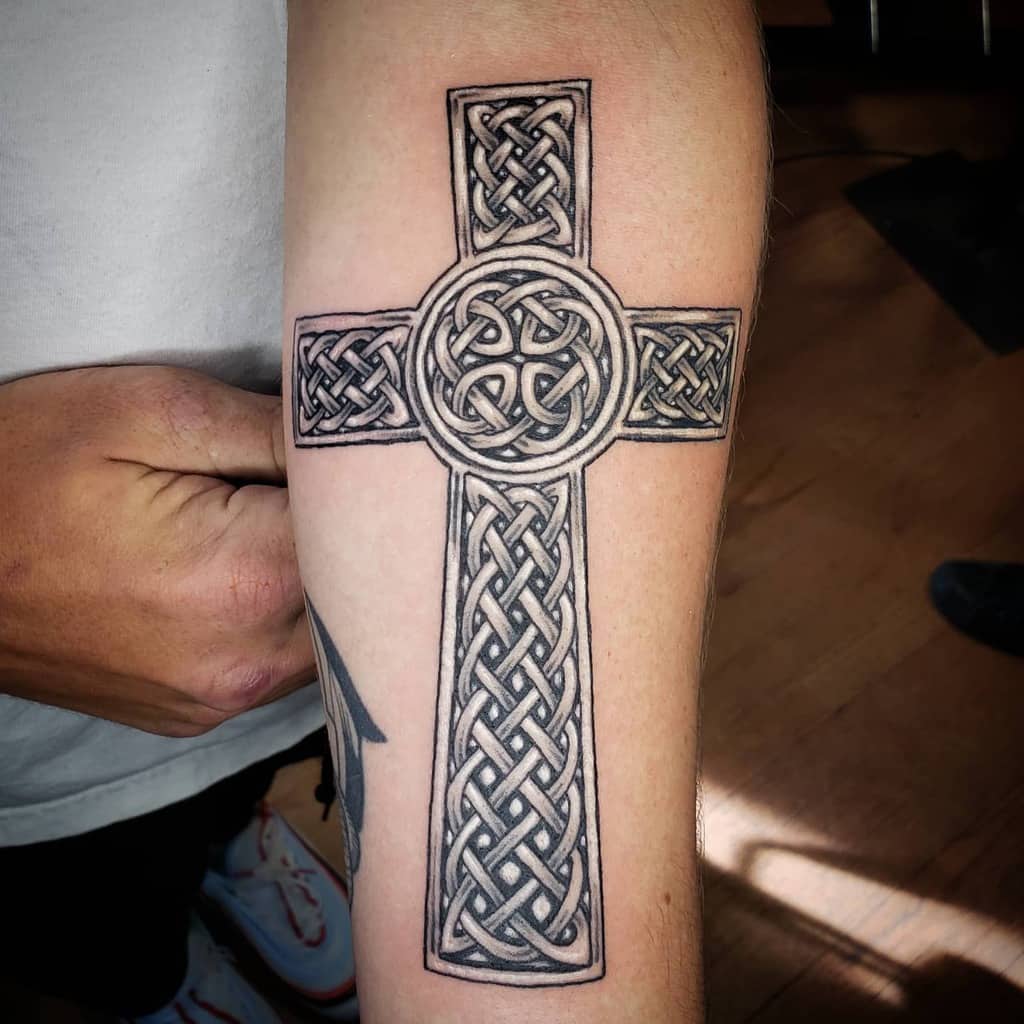 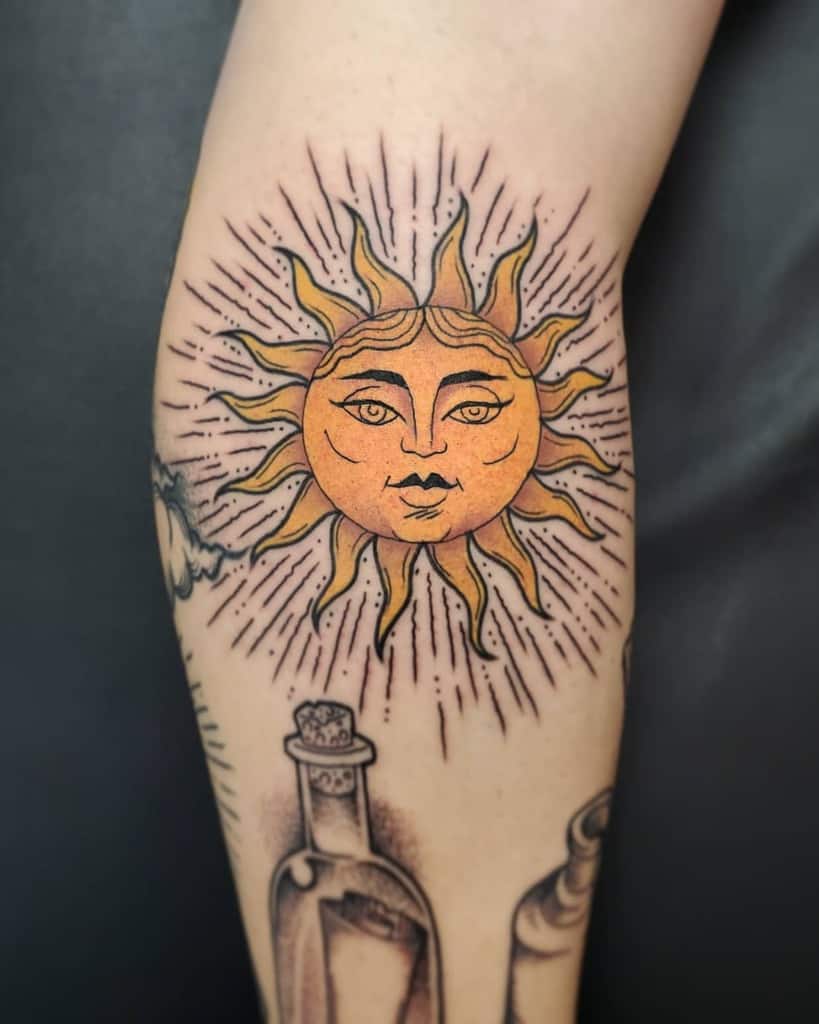 The sun symbol can mean anything from beginning a new life to coming out of a dark place or situation, moving into light, warmth, and positivity. The sun is also linked with truth.

It’s the basis for many creation stories across cultures due to the sun’s ability to help most living organisms grow and prosper. A sun tattoo can be paired with countless other images to transform their message.

Depending on what you pair it with, the meaning will change, and sometimes drastically. 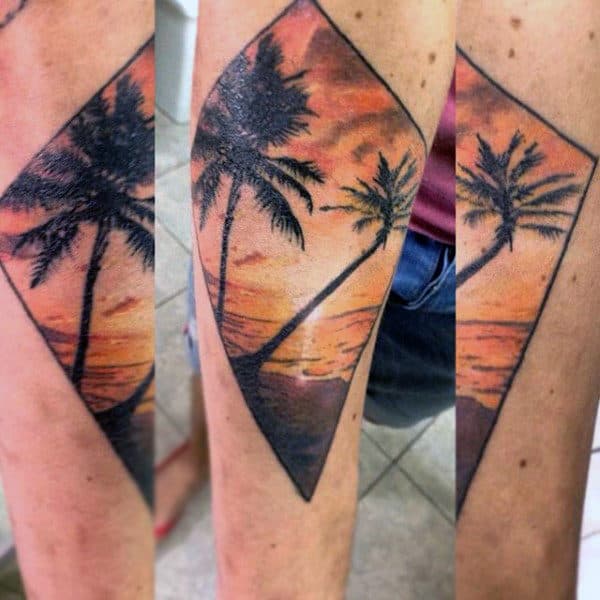 The Sun Through History and Culture 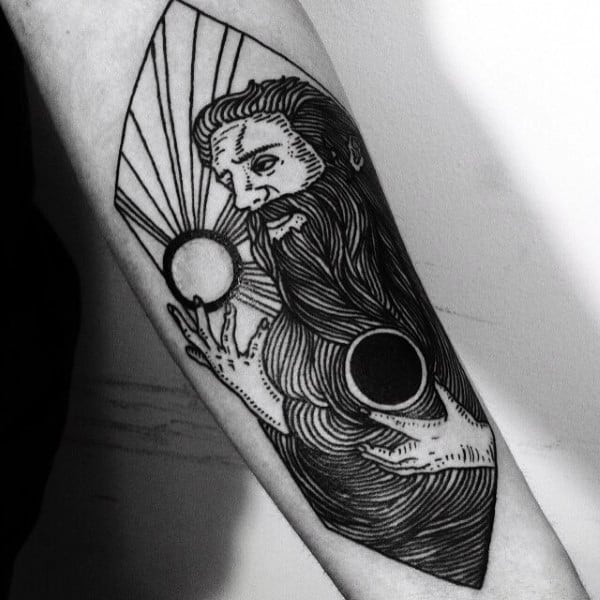 In ancient times, the sun was viewed as a god and worshipped by the ancient Greeks, Romans, and Egyptians. For the Ancient Greeks, it’s often associated with the eye of the god Zeus.

The Ancient Egyptians viewed the orb as the triumvirate of Horus, the rising sun, Ra, the bright sun’s zenith, and Osiris, the setting sun.

Ancient Chinese sun design believed it represented the cosmic eye in the sky and the great male principle, the ultimate Yang.

For Native Americans, the sun can heal and is also the guardian of the day, popular in amulets, wards, and tribal art. 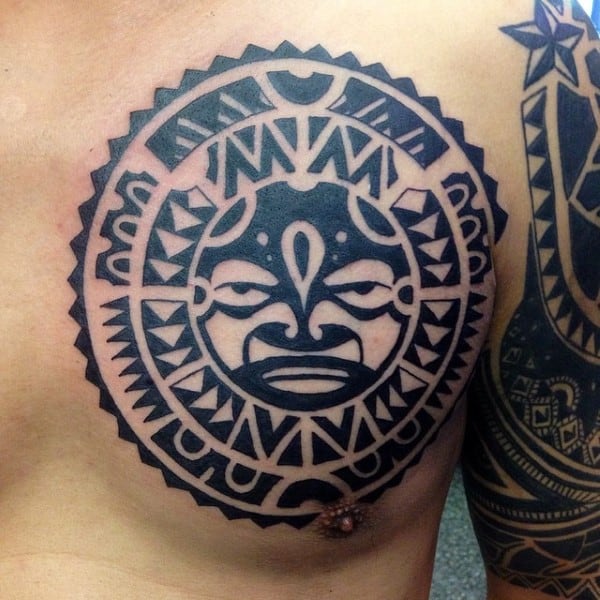 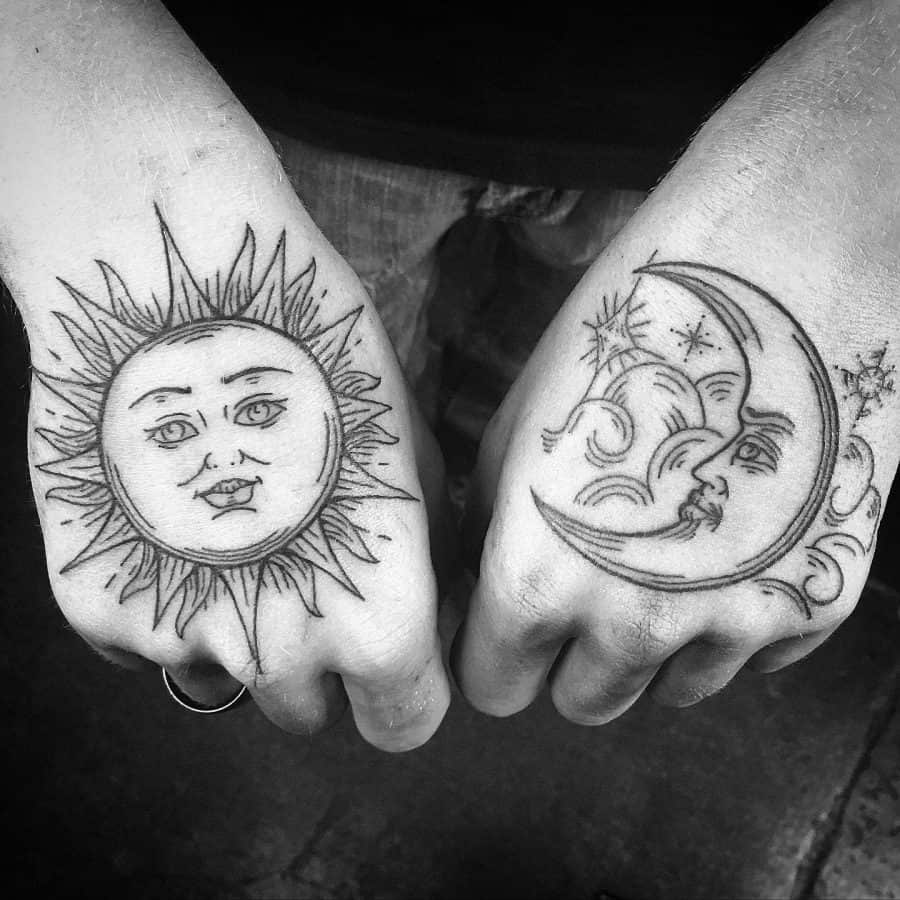 In every culture, in every era, in every place, there’s reverence, mythology, and superstition tied to the sun and the moon symbol – they’re two sides of a coin central to the core of every society. It’s for this reason they’re so popular as a tattoo idea worldwide.

The sun and moon tattoo design symbolize the complementary unity of opposites. It’s polarity but without opposition. This isn’t good vs evil, it’s a masculine and feminine symbol, cooperation not conflict.

While the sacred sun symbol is the life-giver, the moon symbol is fertility and the cycle of birth and rebirth. Most of all, the sun and the moon together symbolize perfect wholeness and balance.

Images of the sun and moon make for a perfect matching tattoo: the sun can be as easy as a small tattoo circle with rays against a crescent moon outlined amongst other lunar traits. 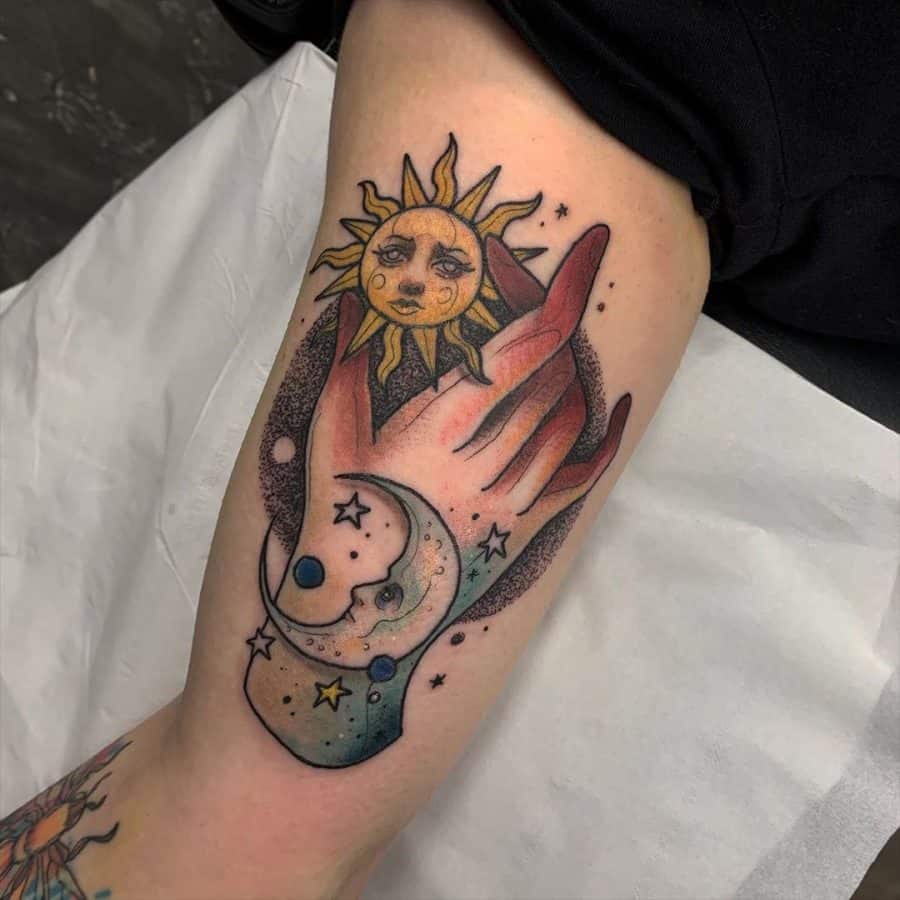 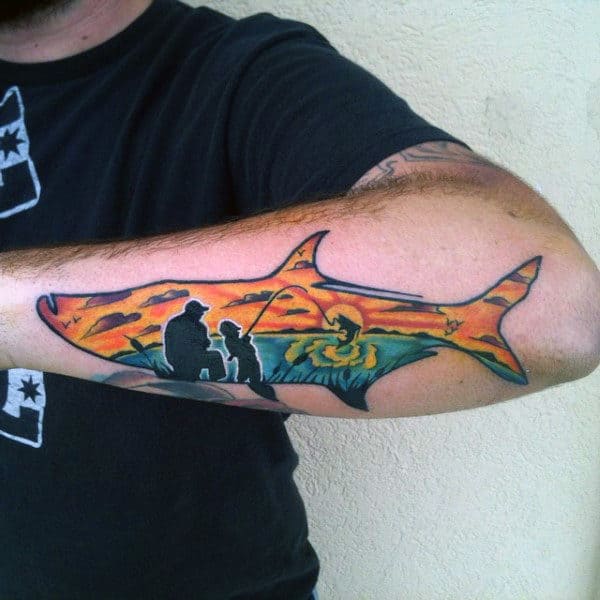 All guys can agree that a sunset tattoo is a universally agreeable choice. While it may be an easy selection, the amount of vibrant detail allows for one-of-a-kind skin art results.

Because we all experience nature in our lives, a sunset tattoo is appealing to men of all backgrounds and demographics. A stellar visage can show an affinity for the outdoors, and women will find the artistry to be incredibly romantic.

Sunset tattoos can stand alone, or they can be flawlessly integrated into a bigger piece. Either way, there is no going wrong with the rich cascading oranges and blues. A horizon line is often incorporated into the best sunset tattoos, and this element can be used to indicate an entire environment. For example, many skyline tattoos also include an oceanic or mountainous landscape.

Sunset tattoos come in all shapes and sizes, but the most attention-grabbing ones are typically gigantic. These creations can encompass the entire torso, so they are brilliant choices for first-timers who want to go big with their first tattoo session.

Because no controversial imagery is included, these tattoos are witnessing widespread acceptance. In fact, sunset tattoos have played a crucial role in moving body art towards mainstream popularity. 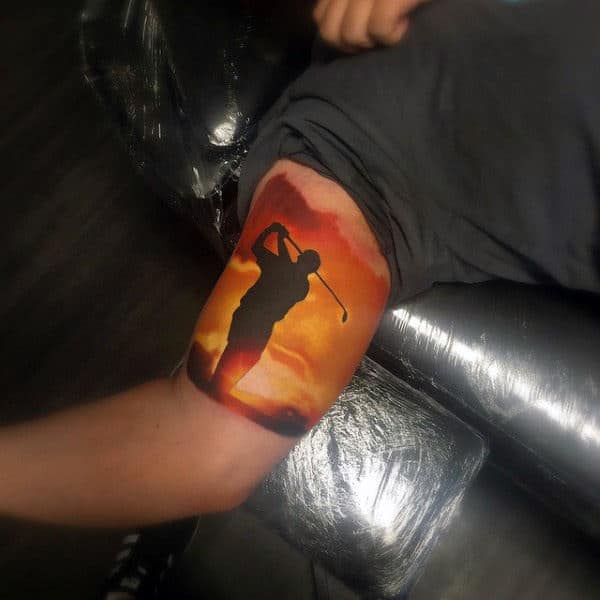 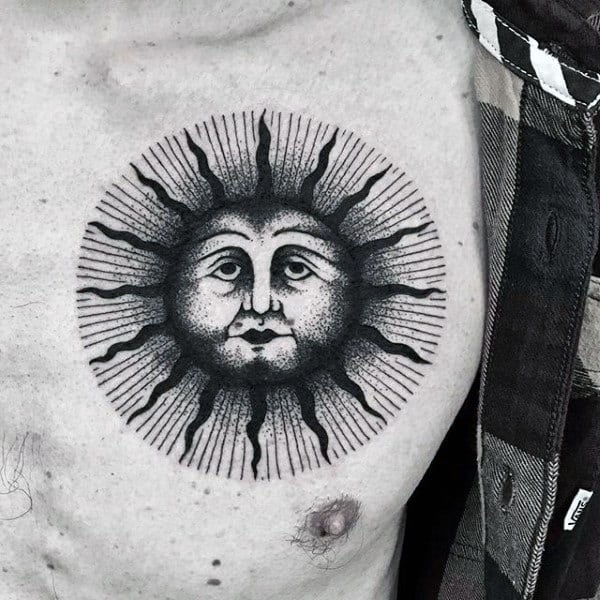 People have come up with a variety of ways to wear 3D and geometric tattoos, and the sun disc is no exception. These designs often turn intricate patterns and multifaceted shapes into some of the most original ink designs through optical tricks, shading, and shape usage.

A successful 3D or geometric sun tattoo is achieved by making the artwork look like it’s a part of your body or as if it’s hovering over the top of it by magic.

A tattoo artist well versed in creating 3D pieces can create your piece through the application of line work, shading, color, and space manipulation to literally add that extra dimension needed to make it come alive. 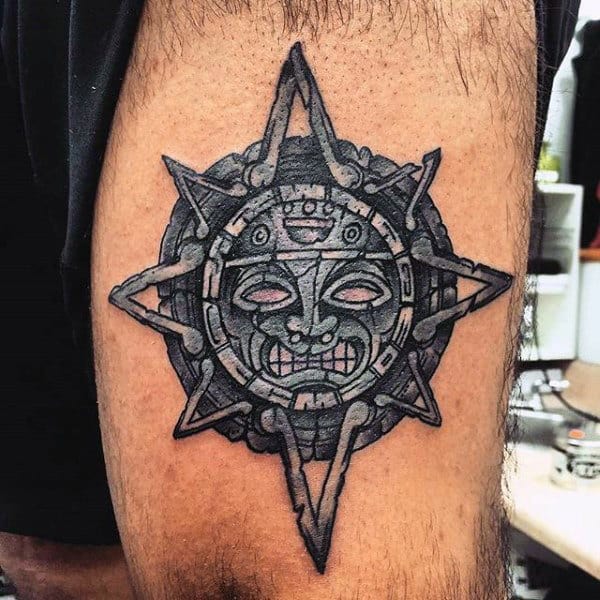 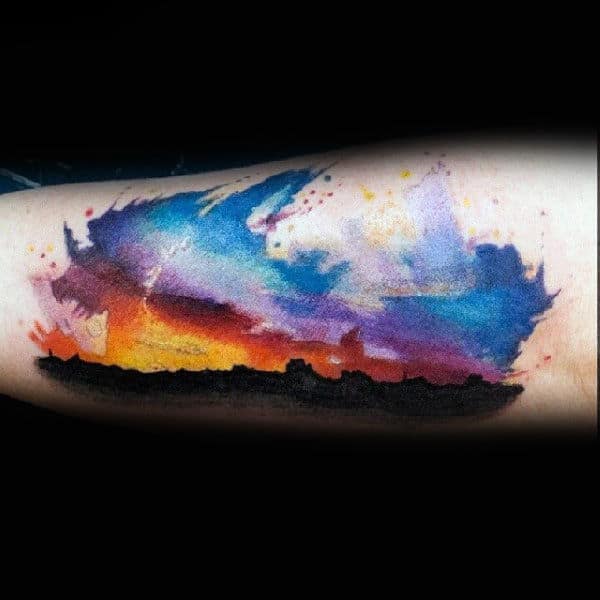 Neo-traditional tattoos take old-school concepts of color and shape delivery but produce finished designs that are richer in color, combined with modern technical approaches to bring a piece to life.

This development can be done with bright colors and effects or through the use of different linework and shade techniques on black or grayscale tattoo designs.

A quality tattoo artist can take a simple direction from the collector and transform the concept into a truly remarkable piece of contemporary body art, simply though subtle manipulation of color, shape, shading, and placement. 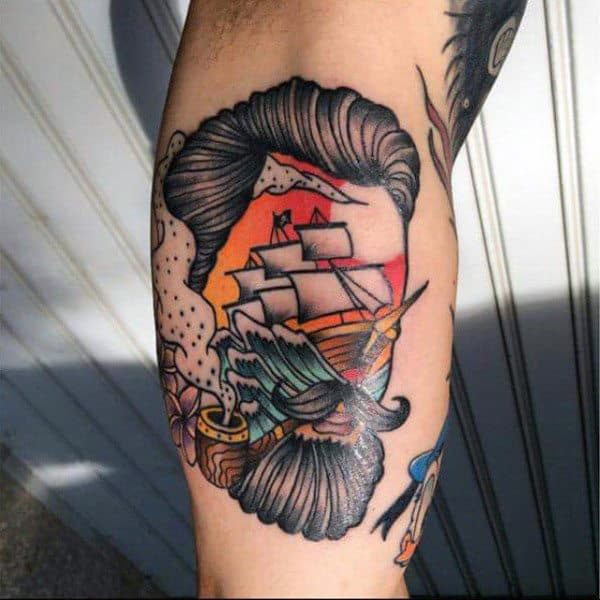 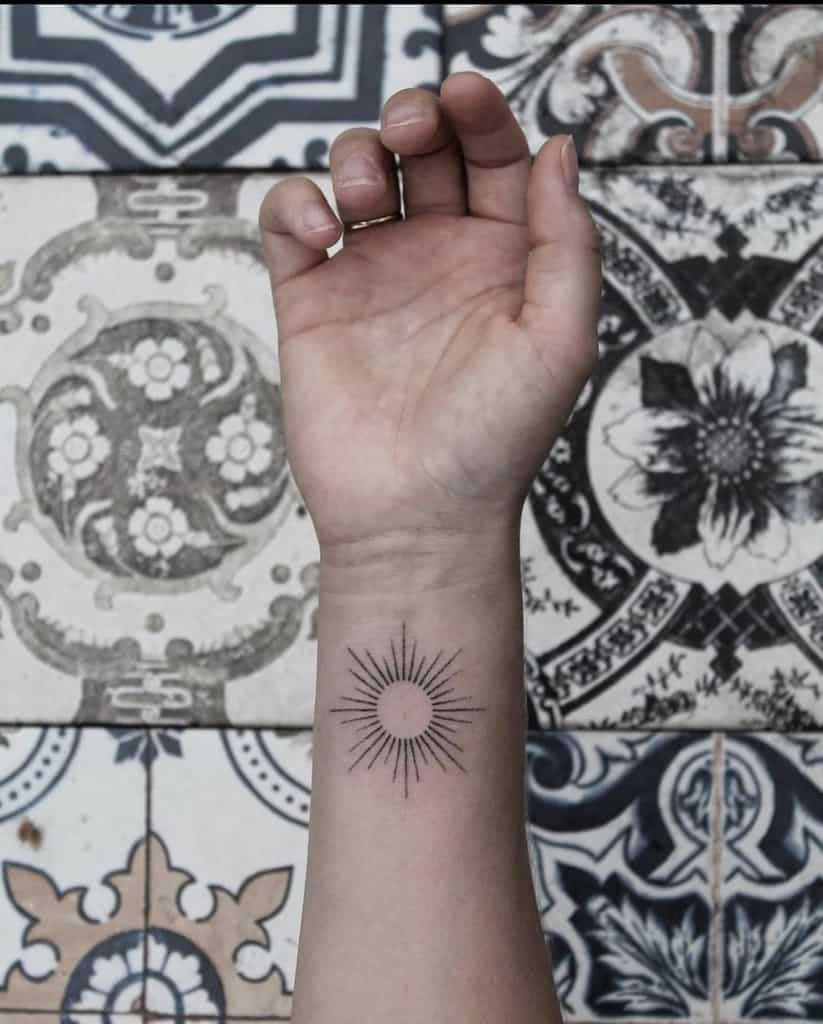 The sun is incredibly versatile as a tattoo symbol. The simple interpretation of the sun makes for popular tattoo choices in a range of styles.

There is a natural reverence all life must have for the sun for without it not only would we perish we would never have come to exist.

The sun is a masculine symbol, it’s our symbolic father. Forever watching over, forever radiating its glorious rays down on us.

Depending on what you pair it with – think of a mandala tattoo or traditional Aztec ink – the meaning will change to a more personalized viewpoint. 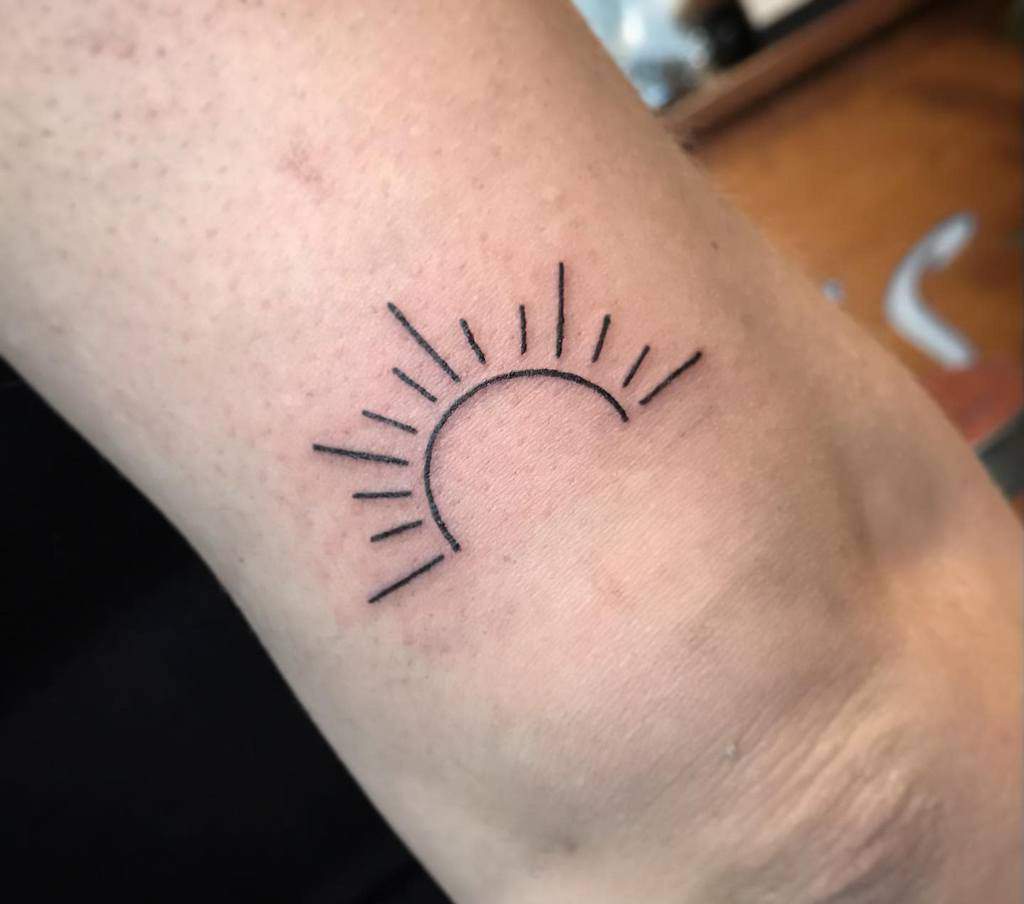