As the crowds shuffled along the security queue at Ibiza airport, not one person noticed that the band standing next to them had played a raucous, sold-out gig at Ibiza Rocks just the night before. A scene witnessed in 2007, the band was Arctic Monkeys, and they were still riding high on the success of Whatever People Say I Am, That’s What I’m Not, the fastest-selling debut album in British history.

Heads down, studying their feet, four unassuming young lads from Sheffield looked exactly that, blending in with the hungover masses heading home after a week-long bender in San Antonio, paler than when they arrived.

But of them all, frontman Alex Turner would never blend in that easily again. After those precocious lyrical anthems put him centre stage at the tender age of 20, he bagged himself a model girlfriend and quickly morphed into an indie-rock god before our very eyes. And with every subsequent album, he’s changed his look, and his hairstyle.

Alex Turner’s haircuts are a bit like his lyrics, drawing from a whole set of influences. And from reserved indie scally to aloof millionaire rockstar, he’s pulled off each restyle without an obvious fail – while Turner looks to the past for his hair-spiration (we have a hunch he’s trying to mirror every stage of hair icon George Harrison of The Beatles) he always gives his retro styles a modern spin. Let’s check out his greatest hair hits.

You won’t find X-Factor audition footage of the Arctic Monkeys anywhere. They made it the old-fashioned way; rehearsing in garages and playing in the corners of pubs and bars, then putting out demos via forgotten social network MySpace. Their sound wasn’t manufactured, and neither was their style.

This early haircut has elements of hero worship, touching on a style favoured by Paul Weller, Ian Brown and Liam Gallagher, mixed with the boyish charm of every kid you’ve ever seen at V festival. Turner moved on from this look, but his Modfathers are still partial to feathered sideburns, giving it the hallmarks of a classic. It works for most hair types, provided it’s not super curly. Joshua Gibson, session stylist at Sassoon Salon and a regular behind the scenes at London Fashion Week Men’s, says the foundation of this look is a good haircut, “which especially needs to be layered on thick, wavy and unruly hair so that it doesn’t look too wig-like.”

Styling-wise he recommends a conditioning styling product to bring out the layers. You need movement in the hair, so avoid gel or any heavy products, but you there are also flyaway strands to control so that it won’t look fluffy. Try applying the product with a comb when the hair is damp and allowing to dry naturally or rough drying with the fingertips. Collaborating with Miles Kane as The Last Shadow Puppets, their styles synchronised. Turner’s hair grew longer, at times with a baby mullet at the back. It was the kind of hair that your Nan might refer to as a ‘mop’ – because your Nan can remember The Beatles, popular advocates of this style. He’s tried various iterations of it, sometimes with a parted fringe or moodily peering out from under hair in his eyes, with longer and shorter lengths at the back. “This haircut is layered through, leaving the outlines longer,” says Gibson. “In terms of styling on thick, wavy hair, apply a moisturiser like Sassoon Curl Form. Apply from the roots to ends with a comb and shake loose afterwards to avoid a parting. Those with fine hair will need a lighter touch when it comes to product.

“Something like medium-fold mousse will give body and a gentle hold. Squeeze with tissues once applied to bring out the texture in the hair. Apply gentle heat with a hairdryer or leave to dry naturally to help create movement.” Alex’s first long hair era began around the time of the Arctic Monkeys’ third album in 2009. It was either the influence of hanging out in California, being around rock royalty (Humbug producer Josh Homme was the founder of Queens of the Stone Age), long-term girlfriend Alexa Chung, or just what happens when you can’t be bothered to cut your mop top: you get long hair with layered lengths. Still, when you’re a serious muso the long-haired grunge look is a necessary step on the rock star ladder, even if sometimes it must have been hard to tell Alex and Alexa apart from the back. 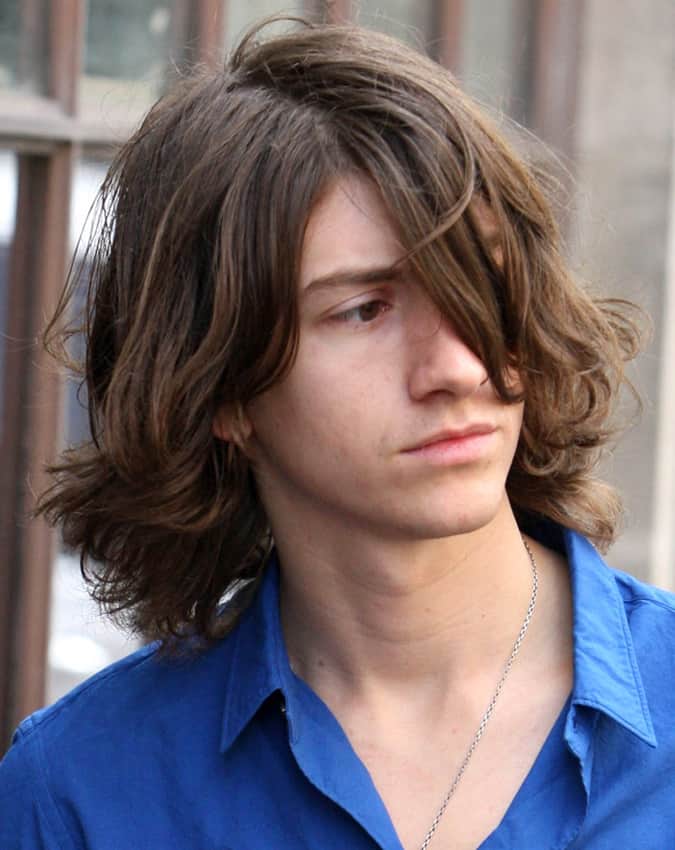 “This look always works best on naturally wavy textures,” says Gibson. It needs to be cut with some layers to give the face definition (long enough to be tucked behind the ears) and around the back at the sides. “Use a combination of moisturising oil and Sassoon Edit Body Mousse to give volume but nourish the longer waves. Apply evenly with a comb when damp and dressing into the desired style,” advises Gibson. In Turner’s case this was usually with a side parting. In 2013 Alex debuted a strong look for the release of AM, taking the greaser look to another level by channelling teddy-boys on the back streets of 1950s Britain. As a band, the ensemble was beginning to look more styled than previously. Blessed by a strong widow’s peak, Turner sometimes wore this rockabilly quiff with a cowlick at the front or smoothly slicked back.

Classic elements of this style are the duck tail at the back and the elephant’s trunk curl over at the front. The more length you have around the front, the higher your quiff can go. “Here, hair is shorter around the hairline and layered enough to allow the hair to be styled away from the face,” says Gibson. “This look usually needs the blow-dry treatment. However, with thicker density hair you could apply gel and groom into the desired style when damp and allow it to air dry.”

In terms of equipment, Gibson recommends the following: “Most fine hair types look best when dried with a vent brush. I would first apply the styling mousse to bulk up the hair. Dry one side first, then the other. For more extreme root lift and a more groomed finish, apply a clay or pomade sparingly at the roots and dry upwards using a medium comb. More can be added to smooth over at the end but with this look it’s important to concentrate the product at the roots, not the ends.” He’s come a long way from High Green, Sheffield. Alex Turner is now a bonafide stadium-filling rock star touring the States, living his best LA life with the requisite model/actor girlfriend (Arielle Vandenberg) with a different sound for Arctic Monkey’s latest album, Tranquility Base Hotel & Casino. Cue more of a hippie look, the occasional off-duty mini man bun, and a beard, to prove his baby face has now graduated from bum fluff to proper facial hair. Don’t think you can go full hobo with this look, it’s stealthily more polished than that. The hair needs to be clean but can’t look shower fresh. To do this: “Apply plenty of mousse, comb all the way from roots to ends on damp hair. Squeeze excess moisture off with tissues and dry hair with your head upside down to achieve root lift and movement. Ideally using a diffuser attachment on the end of the dryer to avoid frizz and increase wave and curl,” says Gibson. It’s also worth investing in a sea-salt spray to get the right balance of texture and shape. And whatever you do, don’t overdo it when you trim the beard. Rock stars shouldn’t look too neat. And then he went and shaved it all off. Changing gears, Alex recently debuted a shaved head on The Late Show with Stephen Colbert. The buzz cut doesn’t feature in the George Harrison hair canon. However, they twinned before, now they’re in synchro again. It’s not Alexa, it’s the current look of his other favourite hair muse: Miles Kane. The response from fans seems like it’s a ‘Marmite’ move: some loving it, some hating it. We suspect he’s feeling liberated from his long hair and enjoying the simple wash-and-go with a grade two all-over. Turner proves once more that he can carry off any hair style. Quite simple, this one. Go for a grade two all over – either nip down to your local barbers or do the job yourself, just make sure to be thorough and get those pesky neck hairs sorted. You’ll need to invest in decent hair clippers for a solid, even shave, and the best part? No more drying and styling your hair in the mornings. The simple life.

But there are some pointers to remember: “This length of hair really only works well if you have a great head shape and you dial up your wardrobe style. If you want to go short, go for a little more length in the top to balance out areas of the head shape with your facial bone structure.”