Harry Styles’ Best Hairstyles (And How To Get The Look)

By thewomeninterestSeptember 14, 2021No Comments7 Mins Read

Admit it, it was once pretty easy to dismiss Harry Styles: just another boy band clone, famous for fifteen minutes and headed for same scrapheap as every other X Factor contestant. The next thing you know, he goes from being one fifth of arguably the biggest band in the world to standing on his own as a solo artist, clocking up the accolades including a BRIT award, a Rolling Stone cover, a Gucci campaign and a revolving selection of hot women on his arm. And that’s before we get into his glorious head of hair. How the hell did it happen? In 2010 Harry, a 16-year-old from Cheshire, stepped up to the mic to sing Stevie Wonder’s ‘Isn’t She Lovely’ to the UK’s X Factor panel. He failed to light up the soloist category, so judge Nicole Scherzinger moved him into the group category along with four other unknowns: Niall, Liam, Louis and Zayn. One Direction was born and they finished in third place. Not that it mattered. 1D were ridiculously successful overnight, making millionaires of the quintet before they could even buy a beer.

Of the five, Harry Styles stood out as the one-to-watch: with the star quality of a young Mick Jagger and the originality that British rock stars are famous for the world over. He has wit, he has charm. And, of course, he has very good hair. Top stylists Tyler Johnston and Oliver J Woods help us break down a short history of Harry Styles’ best hairstyles (try saying that after a few drinks), while giving the lowdown on how you can replicate each look. 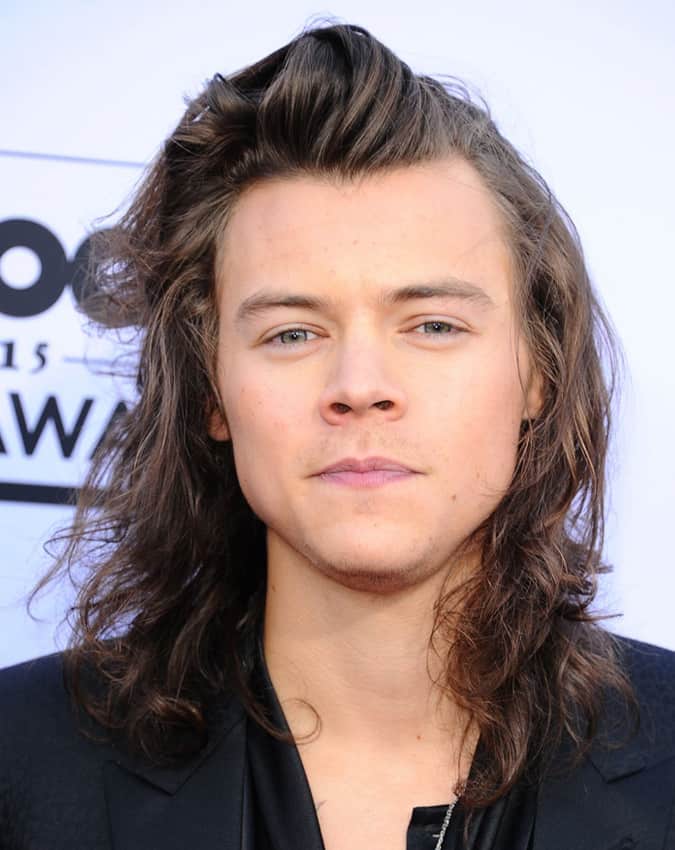 It was only a matter of time before he ditched the classic teen pin-up hair for a look that silently screamed “Take me seriously”. Clothing wise, he’s now a James Bay indie clone, wearing a fedora and embracing the skanky hipster look – on-off squeeze, Kendall Jenner is still into it. So are the designers, as he’s often sporting Louis Vuitton and Gucci.

Long hair is pretty low maintenance in comparison to short, and Harry is lucky that he has the kind of hair that is easy to straighten out. It’s also really versatile. He often sports a half ponytail, a man bun and even a braided look to keep his hair out of his face when performing – or slumming it aboard a superyacht, etc.

“Your hair needs to be shoulder length, with layers that are point cut to achieve bed-head texture,” says Johnston. To style, Woods suggests the following: “Spritz with a salt spray and leave the hair to dry naturally. Take the top section and tie back in a ponytail, leaving the back long and down.”

Like Harry’s man bun? “With hair still damp and with natural texture, scrape the hair back and up away from the face and hairline. Tease out a few sections to give a little texture in the top. Loosely wrap into a knot, high on the top section, and secure with a hair tie,” Johnston says. The Harry Styles Short Back And Sides In May 2016 Harry tantalised fans with an Instagram post revealing his chopped plait in hand and the caption “whoops” – and duly sent the internet into a frenzy. What mysterious hair move was he planning next? A skinhead? A mohawk? Tramlines? Nothing that exciting, actually.

He’d cut it to play the part of soldier Alex in Christopher Nolan’s World War II epic Dunkirk. This required a regulation cut: the 1940s short back and sides. They kept it a little longer than army standards for the film though, so he didn’t lose his trademark quiff completely to history.

From the short back and sides, he went back to his, er, roots, with a classic bouffant quiff (tighter at the sides than before) for his first world tour, which had a Mick Jagger meets glam rock vibe, wearing colourful embellished suits and ruffled shirts from the likes of Gucci and Charles Jeffrey.

Johnston says you need “square layers through the top, while leaving the weight around the outline with broken edges for texture. This cut really makes this look low maintenance.” With the styling technique, Woods recommends starting with wet hair, “towel dry and apply a clay styling product, evenly distribute it through the hair for texture.” From the audition days, Styles favoured a heavy mop with an exaggerated side sweep. At times wavy, at times curly, it worked like catnip on his fans and helped cement his tween heartthrob status. It also attracted Caroline Flack, Xtra Factor presenter, 14 years his senior. It looked like he was punching above his weight …until he moved on to Taylor Swift.

Style wise, he was in peak boy band mode, blending in with his bandmates in high street jeans, Abercrombie T-shirts and pointless tiny scarves. So, the real question is: can a grown man pull off this cut without looking like a tit? Yes, is the short answer, it works well if you have natural waves that need controlling but don’t want to go super short. Just tone down the sweep to avoid the sideways wind tunnel look.

Hair stylist Oliver J Woods is a long-term collaborator with Robbie Williams. To style this look Woods suggests the following: “Hair needs to be brushed forward from the crown towards the front with a wide side parting. You can probably wash and go with this one if you have the right texture. I would apply a little salt spray to manage and define the curls, but let it dry naturally. Or, if you need to, finish with a tiny bit of oil on the ends to take away any frizz.” 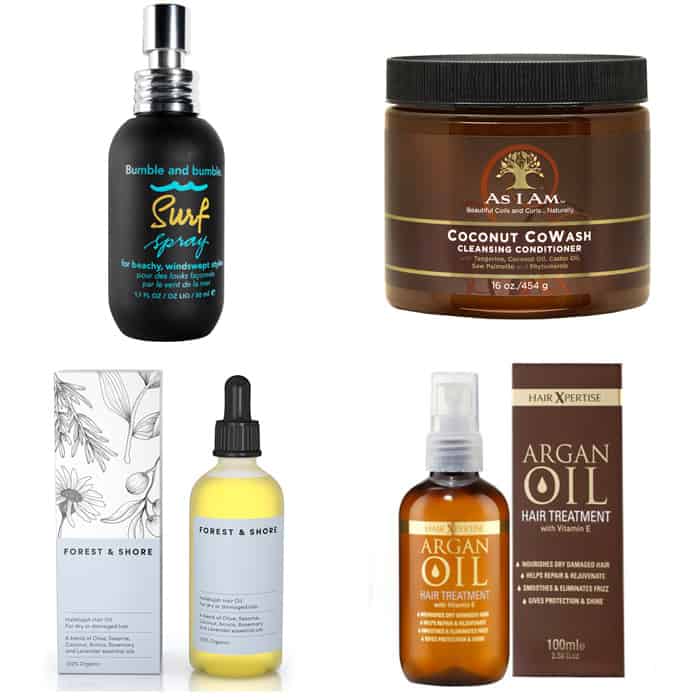 At this point, you get the feeling Harry is trying to find his own style outside of the group. He’s started collecting tattoos and flashing some (hairless) chest by unbuttoning his shirts and rocking a crucifix. The jeans are skinnier, the suits also, and he’s favouring Chelsea boots over sneakers. He’s got access to designer brands now, and is regularly turning up on the f-row at Burberry.

Hair wise, he’s out of the awkward spotty phase so he’s stopped hiding his forehead behind the sweep and taken to pushing his hair back off his face with more than a little volume for good measure. Occasionally, he adds a bandana or headband to the mix, channelling Bruce Springsteen. Annoyingly, he pulls this off too. He’s also now cosy with Kendall Jenner, so whatever he was doing, it was definitely working.

Here “you also need flat layers as per the first haircut,” says Tyler. “However the sides are shorter but still long enough to create texture around the sides.” To recreate this style, “apply mousse to the roots and use a hairdryer, keeping the head upside down to increase volume. Finish off with a wax to smooth the surface down but keep the height,” says Woods. 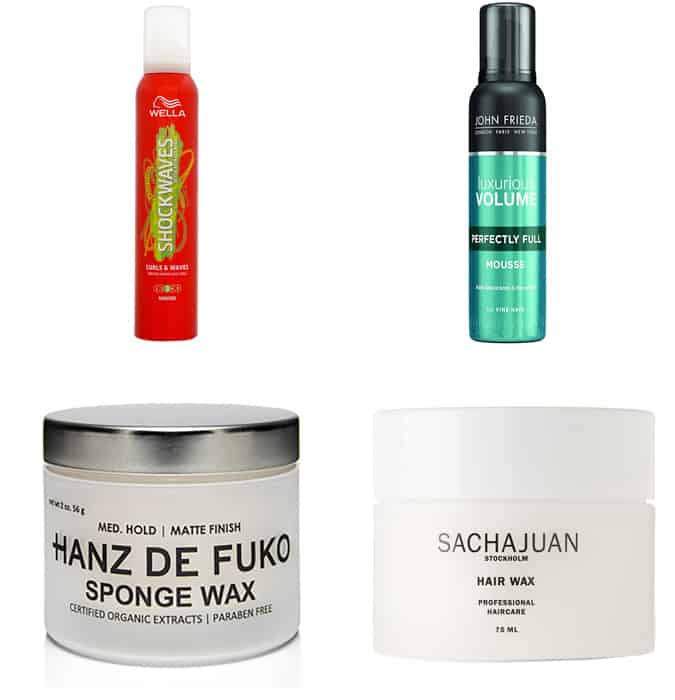