By thewomeninterestSeptember 15, 2021No Comments9 Mins Read

A haircut says a fair bit about a man. Especially when the style in question is less orthodox than another short back and sides, you can be fairly comfortable in snap judgments about their music taste, their fashion sense, even the kind of job they do. But that’s less about the hair, more about our innate tribalism: we like to look like people like us.

Braids have always taken that idea further. The style’s been a fixture since prehistory, adopted as a way to convey power and status by cultures stretching from Africa to Scandinavia and China. They’re experiencing a resurgence in contemporary culture too, in part thanks to long-haired guys who’ve grown sick of the man bun, as well as by men embracing African culture to counter a white supremacist-sympathising president. But with millennia of examples from every corner of the world to draw on, there’s a style to suit anyone, whether your influence is A$AP Rocky or Viking warriors.

The History Of Braid Hairstyles

Braids are arguably the OG hairstyle. They date back some 30,000 years if the Venus of Willendorf, a stone fertility goddess that was discovered in Austria in 1908, is anything to go by. Throughout much of history, braids have played a social role, used to communicate tribal affiliation and marital status.

A plethora of cultures have put their own stamp on the technique, from native American pigtails to Chinese staircase braids. Though mostly worn by women, braids were also donned by men, particularly warriors, from the Vikings to Ethiopians and Celts. Granted, your local barbershop is more likely influenced by more recent history.

In the late 1960s and early 1970s, braids experienced a surge in popularity as black communities began to reject the white beauty standards that demanded hair be long and smooth, in favour of something more traditional. Figures like Nina Simone and Stevie Wonder popularised the style, which took on a political resonance that resurged in the 1990s, in the wake of the LA riots, and recently as a reaction to the deaths of young black men at the hands of US law enforcement.

This gives braids a unique cultural weight. It’s a generalisation, but tighter forms like cornrows tend to be associated with black hair culture; looser plaits and French brands are a more Caucasian phenomenon. If you’re white and do fancy box braids, then be aware that you risk accusations of cultural appropriation. Picture David Beckham’s hair in 2003 and consider hard whether that’s the vibe you’re after.

It’s perhaps better to think subtler. “Incorporating braids into the man bun is quite popular at the moment,” says Benjamin May, from London salon Barber + Blow. Although, considering the topknot was first worn by Japanese samurai, you’re on equally shaky cultural ground. Tread carefully.

But braids are more than an anthropology lesson. They actually look good, too. For guys with long hair, they immediately add texture and shape that waves of surfer tresses sometimes lack. Whether you go for all-over braids or a couple of plaits, you can also use them to soften or enhance what sits beneath them. “Oval faces are best for braids,” says May, “but other shapes can look good too. It’s a matter of playing around and finding what suits you.”

If you’ve got long enough locks, then braids offer some creative styling options that no other hairstyle can match. Find a skilled enough stylist – and Instagram should be your friend here – and the patterns they can craft in your hair are almost limitless. Braids started out as a style that communicated who you were to the people around you and, in the right hands, they should do the same job today.

Before you dive headfirst into braids that spell out your postcode, there are some things to bear in mind if you want to keep your look more Lil Uzi Vert than Riff-Raff.

Men who’ve not leaned into the long hair trend can forget their dreams of cornrows. If you’ve got less than three inches of length then braids won’t hold, says Charmaine Haughton, a trichologist and owner of Nefertiti Hair & Beauty in London.

That’s the minimum, though – ideally you’ll have a lot more coverage; the further your barnet reaches, the more options you’ve got for creative braiding.

Your hair type will also dictate how your braids hold up. “Braids are possible on all hair types, says May, “but for optimal results and finished looks, wavy or curly hair is best suited.” Anything too fine or slippery can be hard to keep in place, so you may struggle with anything more intricate, or require a Post Office-worth of elastic bands to keep your braids neat.

You’d also be wise to avoid braids if your forehead is rapidly winning the battle against your hairline. Because the style exposes your scalp, it can make thinning or receding hair even more apparent.

Plus, you run the risk of making things worse. Tight braids, particularly those left in for months on end, can damage the root and exacerbate breakage and hair loss. When you eventually brush the braids out, you might end up with more in the bristles than on your scalp.

If your hair’s long enough then you can fashion loose braids and plaits at home (see below – although you might want to get a friend’s help). For more complicated styles, seek professional assistance. “It’s quite tricky to get right, particularly cornrows,” says May. “You do need a hair stylist who’s experienced in plaiting or braiding.” The risk of going solo is uneven braids that don’t look balanced on your head and fall out, or which end up too tight and damage your scalp.

Though each style differs by technique, the preparation for most braids is the same. Brush any tangles out of your hair then create a centre parting with the pointy end of a comb. Depending on whether you want your braids straight or patterned, separate your hair into sections. The size of the sections will dictate how big the braids are. If you just want a single braid, you can leave the rest of your hair untouched and then either have it dangle, Viking-style, or run it over or around your head and hold it in place with hairpins.

Probably the most popular style for men, cornrows are tight braids worn close to the head. Single plaits or double braids give you the option of playing with texture and barbers can style them as intricately as you dare. The fuss-free spin on cornrows, these can be ponytailed or left to hang free, depending on your mood. The look’s best with hair short enough that it won’t fall in your eyes. If you can’t wait for your hair to grow out, box braids often add in extensions to give extra length. Be warned that all that extra hair can take several hours to braid, so bring a book. As showcased by Vikings king Ragnar Lothbrok, this style pulls long hair back into a single, thick warrior braid. If your workplace is more spreadsheets than pillaging, maybe dial back the undercut slightly. 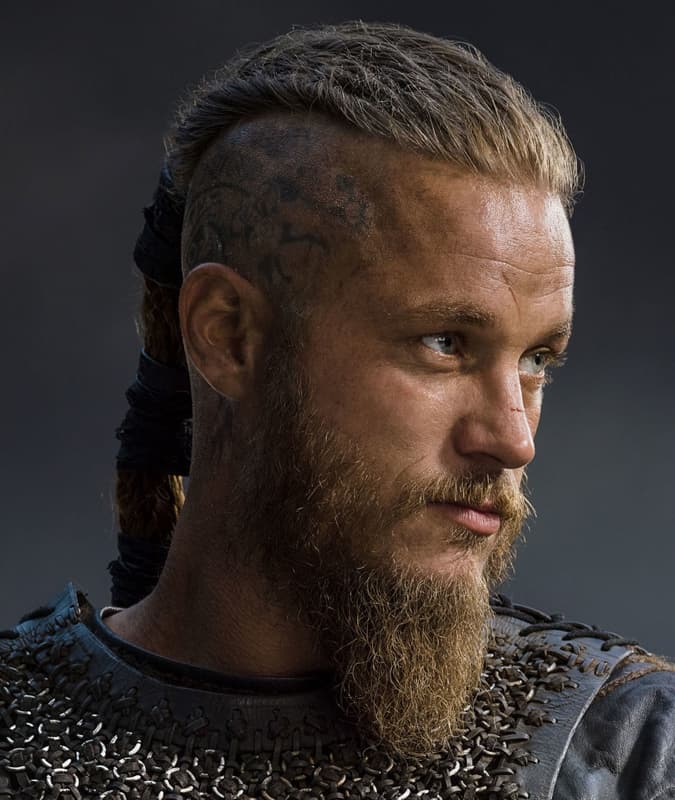 First seen on your 12-year-old sister, and now Jared Leto, this plaited style makes a standard ponytail feel like you’ve actually put some effort in. Just avoid combining with his all- wardrobe. If you’re committed to your man bun, then introduce some texture by adding braids that run from your forehead into the topknot. Works well with one or multiple plaits. Back in 2014, True Detective creator Cary Fukunaga swapped out his topknot for a pair of badass, shoulder-length braids. We’d advise following suit. How To Style Braids At Home

If you’re going to try your hand, arm yourself with some stiffening products. The aim is for the hair to stay in position and not fall apart, which is why thicker or wavier hair tends to work best, but you can cheat your way to similar results. “We like to use products that give the hair a bit of texture without being too stiff and sticky,” says May. “Things like a waxy pomade or sea salt spray help add a little grip to your braid.”

Rocked recently by Kendrick and A$AP, cornrows are enjoying a surge in popularity, says Haughton. But the technique for crafting them remains much as it was when they were first fashioned around 5,000 years ago. The hair is split into three equal pieces, then plaited: left under middle; right under middle; repeat.

Pull each strand tight to keep the braid neat and continue from front to back until you run out of hair (try to use the same amount in each braid so it looks uniform). If your hair isn’t that grippy, wrap an elastic band around the end to keep the hair in place. You can then style your braids in anything from a loose ponytail to a topknot, or let them hang free.

For more involved styles, enlist the experts. It’s tricky enough shaving the hair on your neck, let alone trying to fashion intricate box braids back there, by feel alone.

How To Maintain Your Braids

Once they’re in, braids don’t need much upkeep. “You should put a do-rag on at night to keep them tidy,” says Haughton. This keeps the hair covered and stops grime or lint getting caught up in your braids. That’s important, because you can’t clean them as vigorously as you would unbraided hair, so gunk can easily build up. With washing, less is more, or they’ll fall apart.

“It depends on the type of braid,” says May, “but if you have small, tight braids, then make sure you moisturise the hair and your scalp with oil.” Look for products that contain shea butter or mafura oil, which keep your braids and the skin beneath hydrated.

“Be careful when shampooing your hair,” adds May. “When applying it, only run the shampoo along the length of the braid and don’t rub, as this will cause the braid to come apart.” The 5 Best Men’s Short Back And Sides Hairstyles