What do Brad Pitt, Drake and Cillian Murphy all have in common, aside from being in the top five of your girlfriend’s sexual freebie list? No, not money. Well actually, yes, that too. But we’re talking about the fact they’re all famous for sporting a sharp, handsome fade haircut. You know the type: styled on top, razor short on the sides and back – a look suspended impossibly between V05 model and special forces soldier.

And that’s no coincidence. Fashion is never far from the military (think peacoats, crew necks, combats, boots, anything navy – even watches were born out of the trenches). Hairstyles are no different. Buzz cuts, undercuts and crops all have their roots on the front lines.

Yes, yes. We know. You want to be on the front line too – the front line of fashion. You see yourself at the vanguard of personal preening, going over the top like the brave and well-moisturised soldier you are. That’s why a fade haircut is for you; it’s the advanced guard of military haircuts, edgy where a regular short back and sides is soft.

But when you add a sharp parting line, you raise this cut to a whole new rank entirely.

What Is A Comb-Over Fade?

It’s a specific take on the fade but with a smarter finish. First, it pays to understand the fade itself. “This describes the look created when you taper the hair from extremely short, or even bald – a skin fade – then blend it seamlessly into longer hair on sides and top,” says Patrick Kidd of Patricks barbers and grooming. “Technically, it’s one of the hardest cuts in the game. But when it’s done well, in my opinion, it’s the best.”

It’s important to make a distinction here – one that can make or break your desired look. “This shouldn’t be confused with ‘taper’, when your hair gradually changes from one length to another,” says Kidd. “A fade is shorter than a taper and ends when it reaches the skin, essentially ‘fading’ in.” Kidd recommends you make sure you’re going to a barber in the know. A good fade requires skilled hands.

The comb-over part simply refers to what’s left on top, and we’re not talking about a Trump-style flyover. Instead, it’s a sharp side-parting, with a clearly defined line. It could be long or short or swept back depending on your style.

Why Are They So Popular Right Now?

It seems like everyone wants to join the Peaky Blinders these days. But this cut isn’t on the up just because of Tommy and the gang; it’s gaining popularity because it’s a chance for barbers to really showcase their craft as well.

“The resurgence of the barber as a trade has a lot to do with it,” says Kidd. “Fades are being done to such a high level, with expertise and skill, that if you see a really good one it’s almost mesmerising. They look so clean and tight.”

In other words, barbers want to do fade cuts. That makes them the cut of choice for many influencers, which Kidd believes further boosts the fade’s popularity. “Youtube and Instagram are packed with how-to fade videos,” he says. But you don’t need them, of course. You’ve got us.

Will A Comb-over Fade Work For Me?

You needn’t be Jake Gyllenhaal in Southpaw to look like a winner with a fade. “It’s generally a flattering cut, making the head and face seem less round or circular,” says Kidd. Be careful with the styling on top, though, especially if you’re noticing a few more hairs in the sink when you wash your mop.

“Combing over emphasises your hairline,” cautions Oran Lasocki from barbershop chain Ruffians. That means thin hair will look even thinner. If you’re balding, a buzz cut fade or Caesar cut fade would work much better.

If your face shape is long or thin, it’s also a good idea to keep the fade low on the head if you definitely want one. The style naturally elongates your neck and head, so on the wrong person it can kind of make you look like a tortoise.

Tell your scissorsmith to hang up his tool for the moment. “A fade is usually done with hair clippers,” says Kidd. “Your barber will change the guard length to blend the hair from short to long to create the fade effect.” Below, Kidd outlines his guide to the best fades for your head.

“This is what you ask for when you want the cut or fade short and tight. The barber or hairdresser will generally start with a zero blade length on the clippers and fade the hair into whatever style you are after. It can look a little harsh for a few days but will also last longer than a tapered or longer fade. A good barber may even use a straight razor or electric shaver around the perimeter of the cut.” “I personally love a high fade. I have a pretty round head and the higher you take the fade on the sides, the more elongated your head and face appears. It’s up to you how short you would like it but the fade itself usually happens higher up the head to avoid that triangular shape. Entirely up to you where you’d like the fade to connect to the top, too.” “If you have a longer style on top and you want to maintain some length or volume on the sides, then ask for a low fade. This will make the look seem fresh without having to go too short with the main cut. This can sometimes make your head look a bit more triangular, so make sure it suits your face shape.” 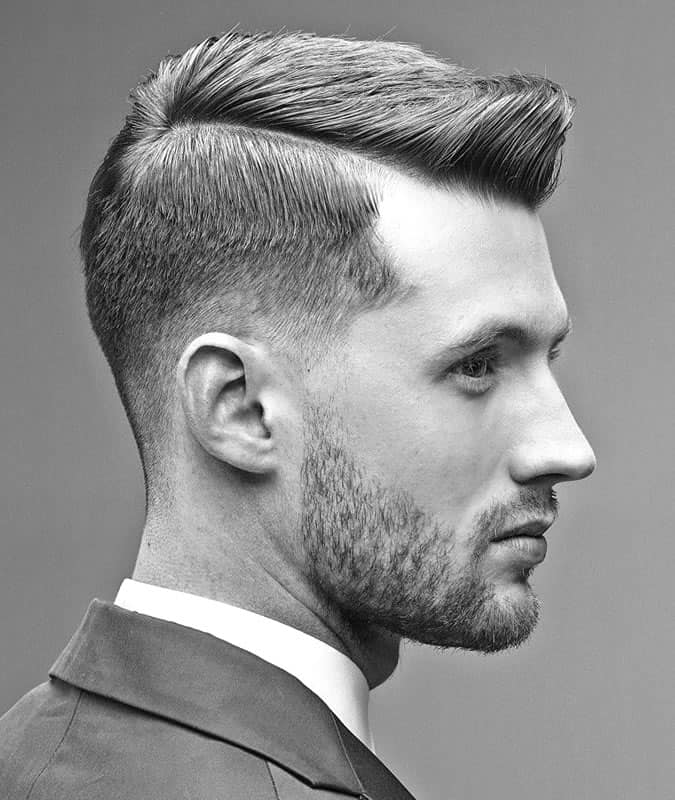 “Never fade above the occipital bone [that lump in the back of your head]. If you go above this it will look bad, trust me.”

The Best Comb-Over Fade Variations For The Top

The most important thing is to go to a barber who understands how the cut and fade combo will work with your face shape. “A good stylist will create a really flattering silhouette that will grow out well,” says Kidd. “As with most things in life, you get what you pay for.”

If any haircut can truly be called timeless, it’s the side part. “It can be created with any hair length, ensuring you maintain the part,” says Lasocki. “You will want to ensure you have some length on top, allowing you to brush it over to the side to create the clean parting. This is typically from the side point of your recession, working with the direction of your hair.”

Will it suit me? While a massively receding hairline might look a bit Mr Burns when combed over, this is generally a very versatile style. “It can work with any hair type,” says Lasocki. “But if you have curly hair you will have to make sure to properly blow dry and use the appropriate product.”

Get the look: Ask for the particular guard length you want on the top of the back and sides, and to maintain length on the side where your parting is – this will help emphasise the clean look of the parting. Then, it should fade down from there. 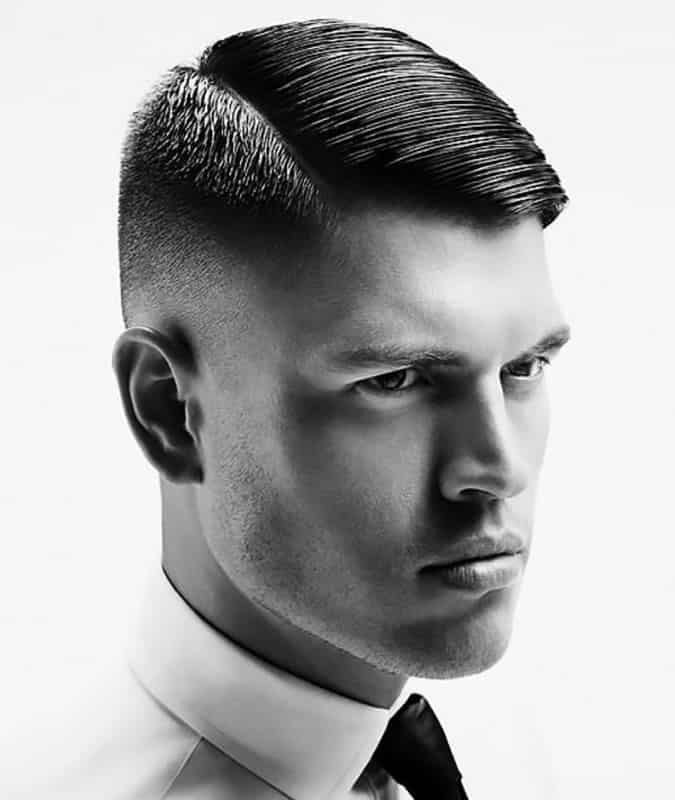 We’re teetering on hipster territory here. That said, done right, the slick back parted fade equals guaranteed handsome points. “Similar to the side part, this is another classic style, which also works with medium or long hair,” says Lasocki. “With the right height it can really square off the face.”

Will it suit me? As above, but times 10. “This style is best for people with a stronger hairline and hair that is not thinning out,” says Lasocki. “You are going to be slicking your hair back it will only emphasise your hairline.” Proceed with caution all ye Jude Law-alikes.

Get the look: You’re asking for a cut almost identical to the side part but with more length on the top. Then it’s all in the styling. “The slick back is traditionally completed with a high-shine product such as a pomade to help bring it closer to the scalp, ensuring it can be properly slicked,” says Lasocki. “Put the product into towel dry/damp hair, then blow dry it with a Denman brush to ensure there’s plenty of volume. When you’ve got the desired shape apply your pomade or paste to complete the look.” A buzz cut parting is kind of a cheat’s version of a comb-over, in that it’s not a parting per se. But it allows people with thinner hair to get in on the divided-do action. As the line is actually shaved into the hair, you’ll either look like a shoplifter or Zayn Malik.

Will it suit me? “This style can be used by anyone,” says Lasocki. “Of course, it is one that people will go to if they are struggling with a weak hairline or thinning hair as it doesn’t draw attention to balding areas while simultaneously squaring off the head.”

Get the look: “Ask for the top of your hair to be taken down to a grade two or three,” says Losacki. Then you need to decide on the parting side with absolute certainty, because it can’t be undone. “Then ask for your fade of choice.

“Due to the short length there is very little to style, you’ll only ever have to towel dry or you can use the hairdryer to save time. However, if you have thick and unruly hair, you can add a strong-hold product like a thick pomade or clay that will maintain it throughout the day.” New Latest Side an High Ponytail Hairstyles Fashion for Everyday